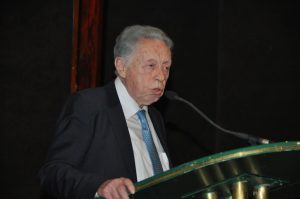 Professor Perović was president of the Court of  State Union of Serbia and Montenegro since its establishment in 2004 and up to 2006.

Academician Prof. Dr. Slobodan Perović was president of the Commission for drafting the Civil Code of Serbia; chairman of Bar exam Commission of the Ministry of Justice of Serbia and long-term member of Legal Council of Yugoslavia.

Professor Perović was founder of the Kopaonik School of Natural Law – Universitas iuris naturalis Copaonici (since 2005 under the auspices of UNESCO).

Professor Perović was president of the Court of Arbitration at the Chamber of Commerce of Serbia and a long-term arbitrator in international commercial disputes, including institututional and ad hoc arbitrations.

He was visiting professor in numerous schools of law in the region; chief editor of the Commentary of the Law of Obligations (1995, two volumes), of the Encyclopedia of Civil Law (1978, three volumes) and of the journal „Scientific Review“; editor-in-chief of journal „Pravni život“ .

Professor Perović was member of the Association Henri Capitant des Amis de la Culture Juridique Française, as well as of other domestic and international scientific and professional forums.

Awards and recognitions by numerous scientific associations and academies of law.

He has never been a member of any political party.

Academician Prof. Dr. Slobodan Perović was author  of several books, text-books and monographs, scientific studies as well as of considerable number of articles in domestic and foreign reviews in the field of civil law, comparative law and philosophy of law. Many of these published in French, German and English, and some in Spanish, Russian, Polish, Hungarian and Chinese. His scientific opus exerted considerable influence on the development of legal theory and practice and made him an authority in the field of law, both in the country and abroad.